It’s been a productive week. I’ve performed my first set of stand-up comedy, had some writing projects take off in a big way (details coming in the future), and I’ve changed up my routes for afternoon walks and commuting.

The last one might seem odd until you see the photo. Simply put, I think that it’ll be best to stay away from playgrounds and schools until December. 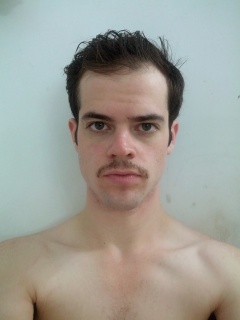 I have to admit that I sorta like wearing a moustache. As much as I’m looking forward to growing my beard back in December, there’s a serious temptation on my part to just grow this out into the most walrus-ey monster of a ‘stache that I’m capable of cultivating.

There’s not much more to say at the moment. If you haven’t had a chance to check out some of this month’s posts, you can view my thoughts on the downward spiral that is The Simpsons, and see what all the fuss over Toronto hip hop artist AndrewLIVE’s new album is about.

As before, you can check out my Movember profile and donate to the cause here.