There’s a sinking sensation in my guts when the first load of hair washes off the plastic guard that covers the buzzing electric blades. Black and copper filaments circle the drain. I imagine my dignity swirling down alongside them. By the time I’ve lathered on the conditioner, when I’m past the point of no return, I’m convinced I’ve made a huge mistake.

(Using conditioner instead of shaving cream is an old stripper trick for a smooth shave, or so I’ve been told. My dad told me my mom does the same thing for her legs, which raises questions I’d rather not have answered.)

When a razor blade touches my face for the first time in more than five years, someone knocks on the door of the bathroom to see if it’s occupied. For a second I’m a teenager again, scrambling to make sure it’s locked. Briefly, I have an inkling of how it feels to be a cutter- staring into the mirror, playing with a weird form of self-destruction, terrified that anyone will see.

I miss my beard.

It has a lot of fringe benefits. When I was heavier, it hid my lack of chin somewhat. It’s a constant source of amusement; stroking facial hair is relaxing, helps me think, and can provide hours of idle entertainment. I even know someone who enjoys tugging on it from time to time (don’t tell her, but I kind of like it too). It’s easy to maintain. I run an electric razor over my face a couple of times a month, moustache scissors to trim the scraggly bits, and I’m usually okay. Even when it does get too bushy, it’s never unmanageable.

I know it’ll grow back. Although I have to admit that there was a moment of trepidation last night, before I slept with my face-lover for the last time. I had this unreasoning childlike fear, for no reason. Talking to the aforementioned beard-tugger over the phone later, she tried to talk me out of my Movember commitment by playing on that same fear.

“What if it doesn’t grow back?”

I’ve been of the opinion for some time that a beard is very much like the male equivalent of breasts. They can be too big, or weirdly shaped, but for the most part they’re just attractiveness boosters. Running my hand down my now-smooth cheeks, I feel like a pubescent girl un-stuffing her bra for the first time. Will they still like me?

Of course, I’m actually a little excited. As much as I loathe abandoning my beloved chin-bristles, it’ll be neat to grow a legit moustache. I’ve never had one before- rather, I’ve never had one that didn’t connect to at least a goatee (a strict no-no, according to the official Movember rules).

(Although given his love of model railroading and how much of my mother’s own past is now apparently in question, who knows?)

Point is, my dad rocked his moustache. He was masculine, distinguished, but fun. There’s a certain tongue-in-cheek element to wearing a moustache, I think. Maybe it just seems that way these days, in the Age of Meta. But even though it sounds hokey, I’ll be happy to be in on the same joke as my old man.

Movember is in on that joke, too. As the moustache has fallen out of style, it was inevitable that our generation of hipsters would bring it back. But using it to address men’s health issues is a terrific thing, far loftier a motivation than shits and giggles.
I can’t help but think of the MRA movement. I have concerns about some aspects of men’s health, but never really found myself agreeing with most MRA advocates. I’d rather draw some attention to issues close to my heart, rather than weave myself in among such a large and varied group of people as the MRA.

That could be because a lot of the MRA movement comes across as batshit crazy, angry misogynists.

Ask me and I’ll tell you that I’m concerned about the suicide rate among men being 4 times higher than women.

I’m not embarrassed to say that I’m scared of what would happen if a woman wanted to keep a pregnancy that I wanted to abort (or the other way around, for that matter), since I have virtually no say in the matter.

Or that I worry about the culture I live in. One that bombards men and women both with unrealistic expectations of body image and lifestyle, but seems to me to only encourage women to talk about their feelings, worries, and doubts.

Talk to me about how circumcision is cleaner, or makes for a nicer-looking penis, and I’ll tell you why I disagree with genital mutilation of any kind.

I’d rather not have other people, even other men (who supposedly hate militant feminism, but turn around and make the exact same mistakes- just in the opposite direction) make my egalitarian arguments for me.

I’ll let my moustache do the talking. 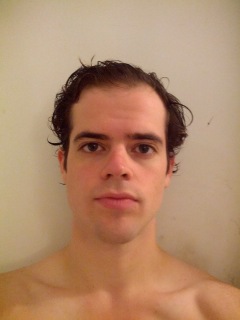 It has begun. If you’d like to get involved, or donate to the cause, you can check out my Movember profile here.
Some initial thoughts:

As soon as I step outside, the wind hits me like a slap in the- well, in the face. Even though it’s a pretty comfortable thirteen degrees outside, my facial nudity makes me want to wrap a towel around my head, burrow my skull inside for warmth.

I can be a bit twitchy on the best of days. But it really doesn’t help that I jump a little every time I walk by a reflective surface because there’s a stranger in the mirror. I pass a window or a bit of glass a couple feet away and I don’t recognize the face for a second. For a narcissist, this is a real blow. Don’t take my reflection away from me!